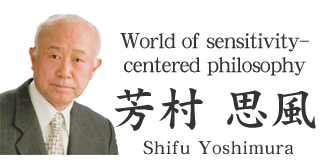 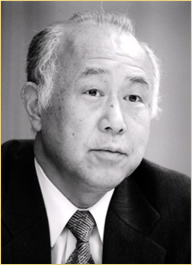 Member of The Philosophical Association of Japan Lecturer at Meijo University.

Ｉ devised first in the world "the philosophical system based on the principle of sensitivity." This system takes sensitivity as the true nature of life and human beings, and even as the final reality of the cosmos.

Now, "Shihoo Juku" are held, everywhere in this country, for the sake of those who are eager to study sensitivity-centered philosophy.

Those who attend the Juku are not only entrepreneurs, salaried workers and female office workers, but people of various ages and types of occupations, including housewives and college students.

Since autumn in 2001, Juku-members who are studying sensitivity-centered philosophy have come together from all over Japan once a year to open "Shihoo Juku National Meetings."

In 2001,"The Symposium about The Voice of Something Great" was started in cooperation with Mr. Kazuo Murakami (professor emeritus of Tsukuba University) and Mr. Tetsuo Gyotoku (researcher of Japan BE Research Center).
The Symposium has been held 7 times so far to realize our dream to foster young people who can assume the responsibility of fulfilling Japan's mission for the 21st Century.
More than 4,000 young people attended the Symposium.

"Sensitivity-centered philosophy" is the philosophy of love.

True love is the power to live with others. 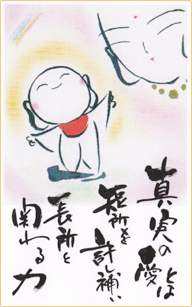 It is the power to acknowledge and compensate the faults of others, and share in the excellence of others.

The above passage explains "the power of love" expounded in the sensitivity-centered philosophy. "Love is not only valuable in the world of literature, but it is to be valued and developed in the field of disciplines. It is something for everyone to carry with as the competence to live with others in our society.

There are people who say that their view of life changed after they attended the lectures on "the power of love." These lectures are held for studying philosophy. But it is reported that many people listened to them in tears.

If you are interested in the lectures, or if you are troubled by human relations, would you come to listen to the lectures, and take a glance at the world of sensitivity-centered philosophy?

The following is taken from the Preamble to the Constitution of UNESCO:

The keyword of the 21st Century, which might replace "Freedom and Equality" of the previous Century, is "Peace."
The Japanese people must be the leader of the World Peace seeking nations, because we are the only people who experienced atomic bombs.

The Constitution of UNESCO was proclaimed in November, 1945. The opening words are very well known, although they are now often ignored. It seems to be the time to reconfirm the significance of these words.